Posted on December 18, 2011 by travelingcycles 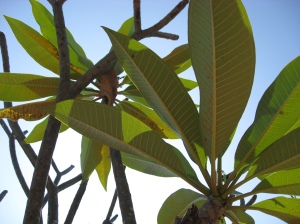 Leaving the mountains slowly behind us, we biked more or less all the way to Nakhon Sawan, a big 200 k’s north of the Thai capital. After spending so many k’s on ascents and descents, it felt very nice that those mountains were gone. With the road being flat, we could speed up a bit and cycle 50 to 130 k’s most days before the hot lunch time. However, the big downside of it was that the mountain views were gone. That was a pity, and we had to live with that. The second ‘Thai disadvantage’ was the heavy traffic especially when entering cities. We tried as much as possible to find nice backroads through the countryside, but that wasn’t always possible. The traffic and therefore air pollution on our paths did accumulate to the extent of unenjoyable levels that we have decided to take the train now to reach Bangkok.

Along with the flat landscapes came rice paddies as far as the eye can see. It was a great view. Especially the young rice plants ! They gave this young fresh green color to the landscape. Add a bunch of egrets, storks, drongos, and shrikes (these are all birds) and you have the picture of countryside travel in central Thailand between Bangkok and the mountains in the north.

As you may have understood the last k’s to Bangkok we’ll sit with our sore butts in a train. We really want to avoid those few thousands of cars passing us with great speed. It’s maybe a bit boring for you, but very nice for us.

We can’t compete with the impossible missions of Tom Cruise, but we try to balance the movie world by releasing a Thai secret agent trailer.

Sweet dreams and speak to you from Bangkok, S&M